By Asian American Coalition for Education 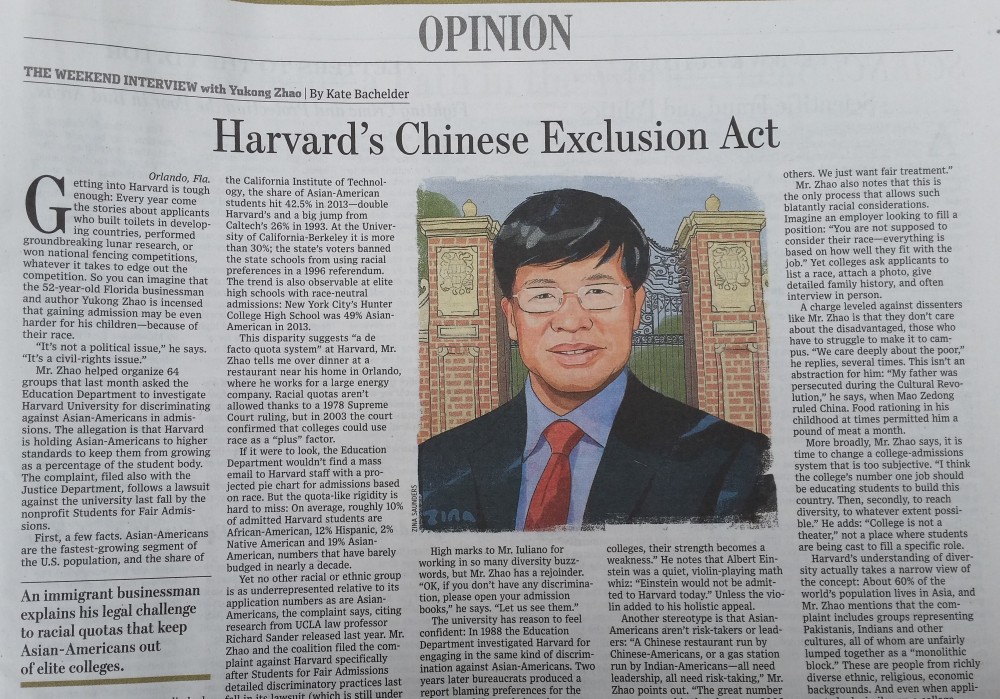 Our joint action presents Asian American communities’ compelling demands for equal protection of the laws and for the end to Harvard’s unlawful discrimination. Through reviewing more than 160,000 admission records and interviewing witnesses, SFFA has uncovered irrefutable evidence of Harvard’s egregious discrimination against Asian American applicants, in the forms of de facto racial quotas, racial stereotypes, and higher standards, all of which have been banned by a succession of U.S. Supreme Court rulings.

Asian American communities are especially outraged by Harvard’s secretive practices of assigning uniformly low Personal Ratings to Asian American applicants across academic deciles. In the past, Asian Americans were singled out as faceless and inferior members of a “yellow horde” lacking the values and human attributes of other Americans. Today, Harvard’s admissions officers use similar approaches to fatally lower their chances of admission. Such discrimination also bears an eerie historical parallel to the institutional anti-Semitism adopted by Harvard, Yale, and Princeton during the first half of the 20th century to maintain a Jewish quota.

Harvard’s consistent low “Personal” ratings of Asian American children are baseless and insulting. Asian Americans’ outstanding social and economic achievements have long been recognized in the American society and we were applauded by Pew Research Center in 2012 as the “highest-income and best-educated racial group.” In our 2015 complaint against Harvard, AACE has provided ample data and facts detailing many Asian Americans’ inspiring accomplishments in entrepreneurship, technology innovations, arts, and sciences. Nonetheless, illegal racial quotas and the stigma of undesirable personalities force many Asian American children to conceal their proud cultural heritage and ethnic identities when applying to America’s selective colleges. As such, a deplorable example of social injustice is taking place in contemporary America!


Harvard’s admissions model, which is widely adopted by many selective U.S. colleges, also undermines meritocracy and America’s national interests. As AACE president Yukong Zhao wrote in Forbes in 2015: “Two sad truths about the state of education in the United States: Our K-12 students are trailing those of other nations, and there aren’t enough homegrown pupils focused on STEM. With this in mind, one would think our leading universities would welcome exceptional applicants who demonstrated strength in subjects like science and math. Sadly, this isn’t the case for all Americans. Each year, many Asian-American students with top SAT scores and GPAs who demonstrate excellent leadership skills (plus countless awards) are unjustifiably rejected by Harvard and other Ivy League schools.”

After filing the Amicus Brief, Mr. Yukong Zhao said: “Harvard’s admissions model is a modern-day social injustice done to Asian American communities. It has created overwhelming study burdens, high rates of depression and even suicides among Asian American children. It also undermines American meritocracy— an indispensable foundation for our nation, by unfairly rejecting many top-performing Asian American students. Their talents could have been fully developed to lead grand projects, solve America’s major challenges, and explore technological and economic frontiers. The very fact that more than 150 Asian American organizations co-signed our amicus brief sends a strong message to Harvard and other likeminded colleges: Asian American communities are united behind our children’s constitutional rights. Your discriminatory admissions practices need to stop!”