REMARKS BY THE PRESIDENT AT A DSCC EVENT

THE PRESIDENT: Thank you, everybody. Thank you. (Applause.) Well, first of all, can we all thank Roger and Linda for this unbelievable setting? (Applause.) This is absolutely gorgeous. And I understand that we also have some outstanding young musicians from the Berkeley School. So let’s give them a big round of applause. (Applause.) Thank you very much. 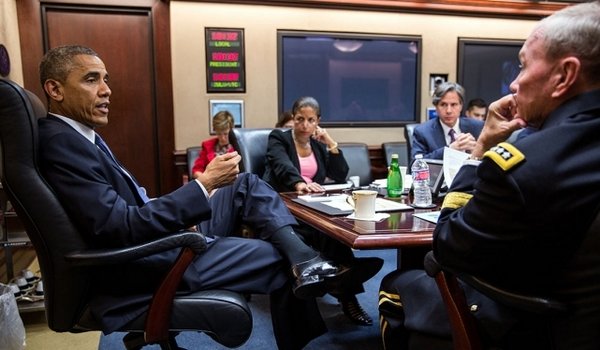 Two other hotshots we got here. First of all, those of you from Massachusetts, your own Ed Markey. Thank you for the outstanding work that you do every single day. (Applause.) And Michael Bennet, one of the finest public servants we have out of Colorado, also has the challenging but fulfilling tasking of heading up — (laughter) — or enormously gratifying task up heading up the DSCC. Please give Michael a big round of applause. (Applause.)

So I’ve got a lot of old friends here, in addition to Linda and Roger, so I’m not going to give a long speech at the front end. On a day like today, in a setting like this, I think a conversation works better. I’ll just make a couple of points.

First of all, it’s really wonderful to be at Martha’s Vineyard, especially when the weather is this good. And Michelle and the girls are having a wonderful time. And we were hanging out with some seals this afternoon who came by and said hello. I found, as somebody from Hawaii, the water is still a little cold. (Laughter.) But it couldn’t have been nicer.

Obviously, we are at a very challenging time. When I first came into office, the big challenges were economic. And we were still in the midst of two wars, but we also had an immediate crisis where the financial system had melted down and that it affected Main Street in all sorts of ways. People were losing homes, losing jobs. It wasn’t clear where the bottom was going to be. And we had to act quickly. And as a consequence of the resilience and the strength of the American people, but also some good decisions that we made early on, and the help of a strong Democratic Senate, we were able to right the ship.

And if you think about where we are now economically compared to where we were when I first came into office, we were then losing 800,000 jobs a months. We now are seeing the lowest unemployment claim since 2006 — the largest drop this past year in unemployment in 30 years. We’ve seen the deficit cut by more than half. We’ve seen the stock market rise so that people fully recovered their 401(k)s. We’ve seen corporate profits booming. Our energy production at unprecedented levels. Solar production 10 times what it was when I came into office; wind power three times what it was when I came into office. We’ve reduced our carbon by more than any nation on Earth. The housing market has recovered. And it’s worth noting that we also have several million people who didn’t have health care before that now have affordable care that they can count on — (applause) — and they’re not going to go bankrupt just because they got sick.

So in all sorts of ways, we are not just stronger than when we — where we were when I first came into office. It’s fair to say that America has the best cards when you look at other countries around the world. There’s no other country you’d rather be than the United States. We are best positioned. And what will determine success in the 21st century is all the stuff that we’re best at — knowledge, innovation. For the first time in 10 years, international investors now say the number-one place to invest is no longer China again; it’s the United States of America. Because they recognize that when you combine our incredible natural resources with a system — an economic system as dynamic as ours, and the incredible talents of our people, nobody can compete with us when we’re making the right decisions.

But, obviously, our economy doesn’t work in isolation. And we also are seeing around the world incredible challenges, many of them all coming to a head at the same time. The Middle East is just one of the major challenges we have. And before I came here, I had a chance to speak to the Prime Minister-designate of Iraq. I’m hopeful that now we have the opportunity to form a government in Iraq that can be an effective partner for us, but, more importantly, can form the kind of broad, inclusive government that serves as a basis for them to repel the terrorist movement, ISIL, that has been sweeping across the country.

But at the same time, we also have problems in Ukraine that we’re having to deal with. Obviously, the situation in Israel and Gaza is something that we’ve all been watching, and deeply concerned about and engaged with.

I do want to point out, though, at a time when the news seems filled with news of Ukraine and Gaza and Ebola and you name it, that in every instance people are constantly interested in finding out how can America help solve these problems. And there’s a reason for that. Because despite the complaints and the second-guessing, and the anti-American sentiment that you hear sometimes on television around the globe, when there’s an actual problem they all recognize we’re the one indispensable nation. They all recognize that our leadership is absolutely critical. And that’s true both for challenges and opportunities.

The truth of the matter is, is that as challenging as some of the problems are around the globe, what we’re also seeing is unprecedented engagement in Asia, and our alliances have never been stronger there. What we’re also seeing is, in Latin America, when I came into office there was a sense that somehow Chavez and other demagogues were going to be setting the agenda there. No longer. Now they all recognize that partnering with us is best for their people and the future of their children and their grandchildren.

In Africa, we just recently had an incredible summit — unprecedented — 50 world leaders who came. All of them just thrilled to be finding ways in which they can work with us to provide electricity to people who have never had it before; to grow crops that they haven’t been able to grow before; to feed themselves; to create commercial partnerships.

And so I guess the point is this — that in the same way that through persistence and a steady hand we’ve been able to guide ourselves out of the economic crisis that we were in five years ago, I have no doubt that we’re going to be able to guide the world, as a country, through some of the rockier times that we’re going through internationally. But all of that requires some seriousness in Washington.

And I think it’s fair to say that the one area where we haven’t seen as much improvement as I would have liked is getting a Congress that is focused not on the next election, but on the next generation; that is serious about how do we grow an economy so that middle-class folks and folks who want to get into the middle class have opportunity. How are we going to make sure that we take advantage of this incredible workforce that we have so that we’re training them for the jobs of the future. How are we going to make sure that we’re supporting small businesses and entrepreneurs in creating the new products and services for the next generation. How do we make sure that we deal with climate change in a serious way, so that our kids and our grandkids can enjoy the same kinds of beautiful, natural resources that we have today.

In each of these instances, we’ve got, unfortunately, a Congress that’s not working. And I know it’s fashionable to say, well, it’s sort of a plague on both your houses, there’s too much partisanship, there’s too much ranker. Well, the truth of the matter is, is that there’s no equivalence between what’s going on. Democrats, I always say, we have our flaws. And there are times where Democrats drive me nuts. (Laughter.) But if you look at the leadership of Democrats in both the House and the Senate, they’re not ideological, they’re not proposing radical solutions. They are common sense. They are pragmatic. And more often than not, they’re willing to do things that are hard, even when it’s not politically convenient. That’s how we got health care passed. That’s why we’ve been able to make progress on an issue like climate change. That’s why we’ve been able to grow the economy and bring down the deficit.

And the decisions we make in terms of the investments of the future — for early childhood education or rebuilding our infrastructure — those are things that should be well in the mainstream of American thinking. And when you ask the American people, they think it makes sense.

What’s preventing us from getting things done right now is you’ve got a faction within the Republican Party that thinks solely in terms of their own ideological purposes and solely in terms of how do they hang on to power. And that’s a problem. And that’s why I need a Democratic Senate. Not to mention the fact that we’re going to have Supreme Court appointments, and there are going to be a whole host of issues that many people here care about that are going to be determined by whether or not Democrats retain the Senate.

So I just want to say thank you in advance for doing everything you do. The last point I’ll make: Democrats, one of the flaws we’ve got is we are congenitally disposed towards not turning out during midterms elections. We get real excited about presidential elections. We lose sight of the importance of elections in the midterm. Part of that is demographics. We’re younger; more minorities vote Democratic, more single women — a lot of folks who oftentimes do not turn out during midterms. But we know how to fix that as long as we continue to have your support.

So I would just ask all of you to feel the same sense of urgency about this midterm election as you would in a presidential election. Because what we’re able to do over the next two years — help people have higher minimum wages, and make sure that folks have family-friendly policies at their work place; making sure that childcare is affordable, or early childhood is something that we invest in; or rebuilding our roads and our bridges, and putting people back to work — all that is going to depend on whether or not we’ve got a Democratic Senate that’s serious.

So I’m confident we can get it done, but we’re going to need your help. And I’m glad you’re here to show that support.

Thank you very much, everybody. (Applause.)