By Zhu Shenshen (from shanghaidaily.com)

Shanghai, Sept. 15, 2014, –Chinese consumers and business were disappointed to learn that the mainland won’t be among the first markets for the global sales of new Apple products unveiled last week.

Still, the new iPhones and smartwatch are expected to exert great influence over the domestic market. 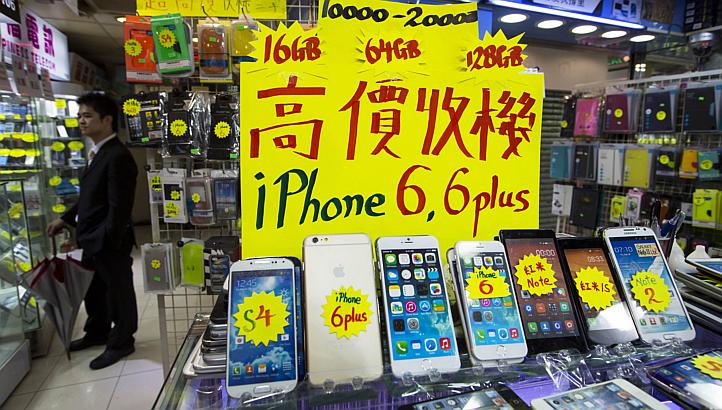 A sign for buying iPhone 6 and iPhone 6+ at a smartphone shop in Hong Kong.

The new devices include the “one more thing” — that of Apple Watch, mobile wallet service Apple Pay and improved 4G services. All of them will propel development and change in China’s wearable computing and mobile payment industries. Both sectors have attracted considerable attention but lack revolutionary products or services.

The iPhone 6 and iPhone 6 Plus, which Apple Chief Executive Tim Cook call “the biggest advancement in the history of iPhones,” feature bigger screens up to 5.5 inches, 38 percent larger than current iPhone 5S.

The company’s first smartwatch, Apple Watch, will debut next year with a starting price of US$349.

I can understand the public disappointment that China’s mainland will be bypassed in the initial sales, especially after Apple launched its iPhone 5S and iPhone 5C in the domestic market as part of their global kickoff.

But Apple’s aura continues to burn brightly in China. Its new product launches always create a buzz in IT circles and on top video websites such as Youku and Tencent.

So what’s new this time?

The new Apple Watch enables people to communicate from their wrists by sending and receiving messages, answering calls to iPhone and even recording heartbeats for health-monitoring.

Of course, the idea isn’t an Apple first. Sony and Samsung have already released watches with those features.

However, Apple is hoping that its watches will be the most fashionable, though doubts still linger about battery life and comparisons with the design of traditional Swiss-made watches.

Put another way, will people be willing to wear devices that were once the exclusive purview of geeks? Several female friends told me that they are eager to purchase the Apple Watch because of the “rich variety of watchbands” and “beautiful gold decoration.”

Wearable computing devices are the new hot trend. The smartwatch market is expected to generate revenue of about US$10 billion by 2018, a sixfold jump from estimated earnings this year, according to Citigroup.

Apple’s entry in this market may trigger demand, creating new opportunities for domestic products, like Baidu’s wearable device BaiduEye and Geak’s round smartwatch, scheduled to debut next month.

Apple Pay, the company’s new mobile payment service, is based on NFC (near-field communications) and fingerprint recognition. Apple Pay is now available only in the US market.

It’s the first time Apple has included an NFC function, the most popular wireless payment technology standard, on an iPhone.

Sales of NFC-featured mobile phones may quadruple to 1.2 billion units in 2018, compared with 2013, and the surge will mainly be attributed to Chinese users, according to research company IHS Technology.

The NFC is technically ready on the mainland as China UnionPay finishes machine upgrading in shops, restaurants and subway stations. There were 1.3 million POS (point of sale) machines supporting NFC in China by 2013. With a strong player like Apple and with consumers excited to try new things, the expansion of wireless payment will be rapid in China.

Personally speaking, NFC is a strong reason for me to replace my iPhone 5S with the iPhone 6. It would enable me to swipe the new iPhone when I want to ride the Metro in Shanghai instead of having to carry a transport card.

But Apple still needs to negotiate with state-owned companies like China UnionPay and China Mobile to launch such services. That takes time and effort, said Li Ye, a researcher of Analysys International.

However, China Unicom and China Telecom are allowed only to offer 4G services based on FDD-LTE technology in about 30 cities nationwide. The FDD-LTE is widely used in Western markets, including the United States.

With Apple’s latest innovations, the carriers will no doubt hasten the process of upgrading their 4G networks. After all, the iPhone is still a powerful magnet to attract high-end 4G users.