Boston, Oct. 1, 2014, — Today is the 65th Anniversary of founding of People’s Republic of China. A flag raising ceremony was held at Boston City Hall plaza on Sept. 27. Over a thousand people showed up to witness the national flag of China rising along side of US National and Mass. State flags. 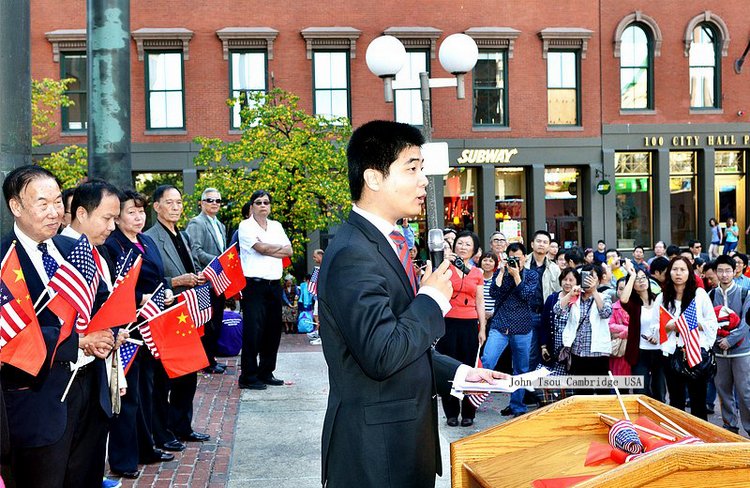 Binghong Han of MIT speaks at the ceremony (photos by John Tsou).

Council General Sun Guoxiang of Chinese Consulate in New York City attended the flag raising ceremony. In his remarks, he thanked Chinese Americans for their support of China’s development over past decades, and especially after the establishment of normal relations between US and China 35 years ago. “The common interests are far more important than differences between US and China,” said Mr. Sun.

Binghong Han, president of MIT Chinese Students and Scholars Association, delivered a speech on behalf of Chinese students. Suzanne Lee, founder of Chinese Progressive Association, recalled her efforts in the 1970s to help promote better relations between US and China in her speech.


The following is a statement of Secretary of State John Kerry.

On behalf of President Obama and the people of the United States, I would like to extend our best wishes and congratulations to the people of The People’s Republic of China as you celebrate your 65th National Day on October 1.

This year also marks the 35th anniversary of U.S-China diplomatic relations. These past 35 years have seen our cooperation expand in remarkable ways. Our continued efforts to confront some of the world’s most pressing challenges such as climate change, the deadly Ebola virus, wildlife trafficking, and nuclear nonproliferation demonstrate that comprehensive cooperation between our countries is indispensable.

Now more than ever, a strong relationship between the United States and China is critical not only for the prosperity of our two countries but also for the world. We have a stake in each other’s success. In this effort, we are aided by the millions of Chinese and Americans who are forging new business, educational, and cultural ties across the Pacific every day.

Please accept the wishes of the people of the United States for a joyful National Day.