Boston, May 15, 2015, — After just two-day delibrations, the jury has reached a decision for death penalty for Dzhokar Tsarnaev this afternoon. It’s exactly two years and one month from the Patroits Day bombings near Boston Marathon Finish line on April 15, 2013. Boston Mayor Martin Walsh thanked the juros “for their service to our community and our country.” 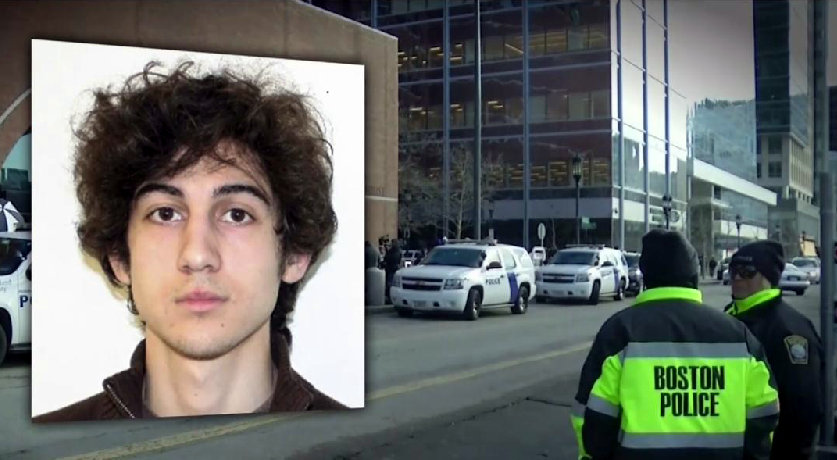 Dzhokar Tsarnaev was found guity of all 30 counts in Boston bombing at Federal Count in Boston (file photo).

“I hope this verdict provides a small amount of closure to the survivors, families, and all impacted by the violent and tragic events surrounding the 2013 Boston Marathon. We will forever remember and honor those who lost their lives and were affected by those senseless acts of violence on our City. Today, more than ever, we know that Boston is a City of hope, strength and resilience, that can overcome any challenge,” stated Mayor Walsh in a statement.

U.S. Attorney Carmen Ortiz said during interview with the media after the death penalty verdict: “Our thoughts should now turn away from the Tsarnaev brothers for good.” She added: “This was not a religious crime. This does not reflect Muslim belief,” she said. “It was a political crime designed to intimidate … the United States.”

Attorney General Loretta Lynch Calls listed names of the four victims that Tsarnaev murdured. “Dzhokhar Tsarnaev coldly and callously perpetrated a terrorist attack that injured hundreds of Americans and ultimately took the lives of three individuals: Krystle Marie Campbell, a 29-year-old native of Medford; Lingzi Lu, a 23-year-old Boston University graduate student from China; and Martin Richard, an 8-year-old boy from Dorchester who was watching the marathon with his family just a few feet from the second bomb. In the aftermath of the attack, Tsarnaev and his brother murdered Sean Collier, a 27-year-old patrol officer on the MIT campus, extinguishing a life dedicated to family and service.

“We know all too well that no verdict can heal the souls of those who lost loved ones, nor the minds and bodies of those who suffered life-changing injuries from this cowardly attack. But the ultimate penalty is a fitting punishment for this horrific crime and we hope that the completion of this prosecution will bring some measure of closure to the victims and their families. We thank the jurors for their service, the people of Boston for their vigilance, resilience and support and the law enforcement community in Boston and throughout the country for their important work.”