Interested in local politics? As an Asian American have you wondered what it takes to make an political impact? Wait no further! On August 14 CYPN invites you to join our seminar with Michelle Wu, the most successful Asian American politician in Boston. Right after graduation from Harvard Law School in 2012, Michelle got elected the following year at the age of 28. She is the first Chinese American and first Asian American woman to serve on the Boston City Council, as well as the youngest current member. 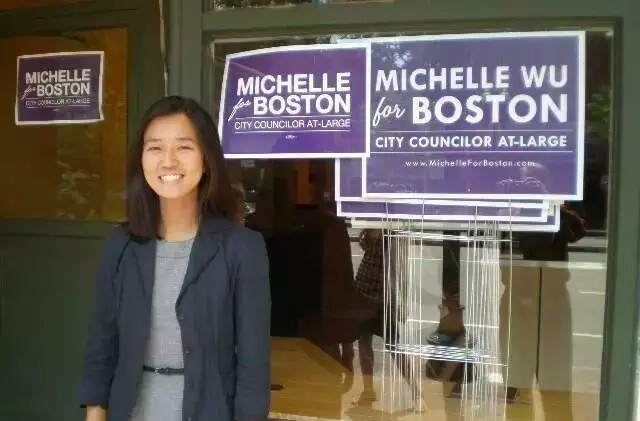 The seminar is free and is open to public. Registration is required as there is limited number of seats available.

Self Introduction by Councilor Wu

MY NAME IS MICHELLE WU. IN 2013, I WAS ELECTED AS A BOSTON CITY COUNCILOR AT-LARGE. I AM RUNNING FOR RE-ELECTION BECAUSE I BELIEVE IN BOSTON. I BELIEVE WE CAN LEAD AS A NATIONAL MODEL OF AN INCLUSIVE INNOVATION ECONOMY THAT CONNECTS ALL OF OUR NEIGHBORHOODS AND COMMUNITIES. I BELIEVE WE CAN SERVE AS AN EXAMPLE OF AN URBAN PUBLIC EDUCATION SYSTEM THAT CREATES MEANINGFUL PATHWAYS FOR ALL OUR STUDENTS, AND I BELIEVE THAT ALL OF THIS DEPENDS ON A FOUNDATION OF STRONG, VIBRANT, LOCAL ENGAGEMENT IN EACH OF OUR NEIGHBORHOODS.

I have gotten to know and love the sense of community and family that Boston’s neighborhoods represent. From advising entrepreneurs at the WilmerHale Legal Services Center in Jamaica Plain, to working with survivors of domestic violence at the Medical-Legal Partnership at Boston Medical Center and health centers around the city, I have seen the power of community organizations serving city residents. As legal guardian of my youngest sister, I have chaired the School Site Council for the Eliot K-8 School in the North End and volunteered with the Boston Latin Home and School Association. Prior to serving on the Council, I worked on the U.S. Senate campaign of my former law professor, Elizabeth Warren, directing the campaign’s statewide outreach effort to communities of color throughout all of Boston’s neighborhoods and in gateway cities across the Commonwealth. In my first term as Boston City Councilor At-Large, I have been committed to working towards a city government that is accessible, responsible, and built on community, and have been a proud voice for progressive causes that impact residents in all of Boston’s neighborhoods

Family has been the driving force in my life. I’m the oldest of four kids born to immigrant parents from Taiwan. Growing up, I watched my parents navigate language and cultural barriers while pursuing the American Dream. I worked hard, studied hard, and got into college at Harvard, where I fell in love with Boston. After graduation, I got a great job in the Financial District. But when my mother began to suffer from serious mental illness, I left my job in Boston and went to Chicago to take care of her and my younger sisters. While there, I started a small family business, a tea shop featuring weekly poetry readings and open mic nights. I was fortunate to come back to Boston for law school, bringing my mother and sisters with me.

Through my experiences as a former small business owner, legal advocate, legal guardian—and most recently, as new working mom—I have seen how city government has a direct impact on people’s lives. Previously working for Mayor Tom Menino and having served one term on the Boston City Council, I have experienced the potential for city government to be responsive, innovative, and accessible. It is for these principles and for families around the city that I hope to continue to serve.