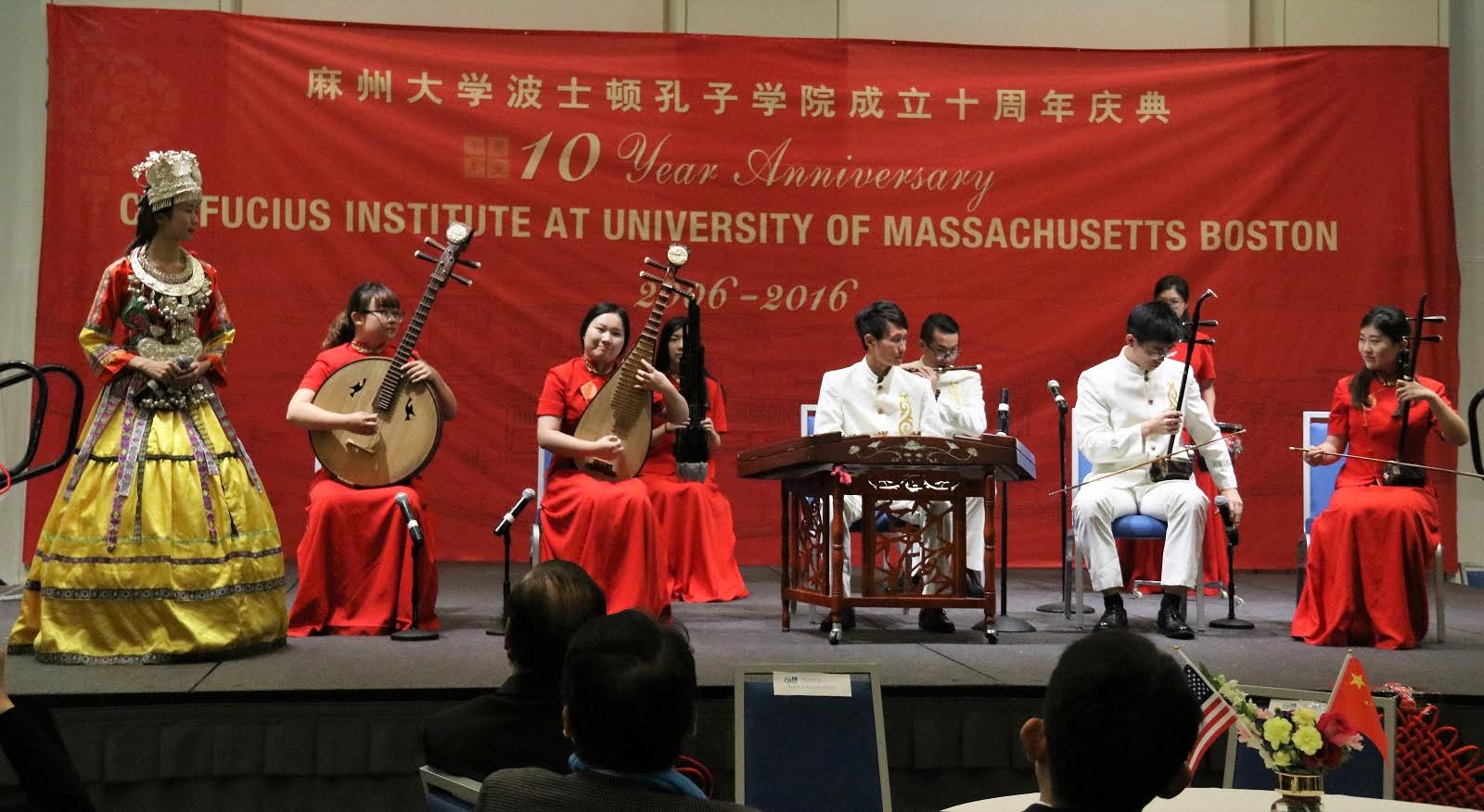 Distinguished guests, including Keith Motley, Chancellor of UMass Boston, and Wu Xiaoqiu, Vice President of RUC, praised University of Massachusetts Boston Confucius Institute for its countless achievements over the past ten years in their speeches.

If you have missed the performance by RUC Student Art Troupe. The video below by Ming Zhou of bostonese.com captured .

The Troupe has been playing an active role in campus cultural activities about culture and art since it was established. It puts on special shows every semester and actively participates in campus artistic performances. Some performances have been presented in well-known places of art such as National Grand Theater, Beijing Poly Theater, Zhongshan Concert Hall and Beijing Concert Hall.

The Troupe enjoys high reputation at home and abroad and earned the honorary title of Student Art Troupe of Beijing. In the 3rd University Student Art Show of Beijing, the September of 2010, the Troupe participated in all of the six competitions and won the first prizes of Folk Music, Symphony, Dance, Chorus, and Beijing Opera, as well as the first prizes of three other individual events. In the second Ibsen International University Theater Festival held by the Ministry of Culture of Norway in the October of 2011, the Youth Drama Troupe earned the Special Award for Performance as well as the Best Director Award and the Best Actor Award. In the 3rd National University Student Art Show in the February of 2012, the Youth National Orchestra, the Youth Chorus, and the Youth Dance Troupe separately won the first prize of art performance.

In recent years, the Troupe has been continuously developing, innovating and encouraging original creation. The Troupe has found a way of student original art work with RUC characteristics, taking the lead of the universities in Beijing and even in China. The Troupe successively established workshops of music, song and dance, and drama, which consisted of RUC faculty and students. In the workshops they can give full play of their art imagination and concept, discuss art idea and inspiration, which forms a unique original art work team of faculty and students. They have worked out a lot of classic works from the perspective of RUC, like Passing by Your Hometown, Chasing the Light: Songs for Alma Mater, and Unforgettable Past. In October of 2012, Socrates, the modern drama independently created by RUC faculty and students was shown at the National Grand Theater. The drama was well received by both experts and students, and got positive feedback and much social attention.

With support from the university leadership and other related sectors of the society, the Troupe is developing and growing. More people in and out of the university hearing of the Troupe come to love and support it. In the future, the Troupe will create more and better works, promote the connection with the society and strive to build a high-level Student Art Troupe.