BOSTON – Mayor Martin J. Walsh, the Boston Transportation Department and the Mayor’s Office of New Urban Mechanics today announced the City of Boston will partner with nuTonomy to begin testing autonomous, or self-driving, cars in Boston by the end of 2016. nuTonomy, a leading developer of autonomous vehicles, has signed a Memorandum of Understanding (MOU) with the City of Boston and the Massachusetts Department of Transportation that will authorize nuTonomy to begin testing its growing fleet of self-driving cars on public roads in Boston, once their application is approved. Last month, Mayor Walsh and Governor Baker simultaneously issued Executive Orders directing the development of an on-street testing process. The City of Boston will be able to carefully monitor the effects of autonomous vehicles, and further identify how autonomous vehicles will further the safety, access and sustainability goals of Boston’s transportation plan, Go Boston 2030 through this first partnership. 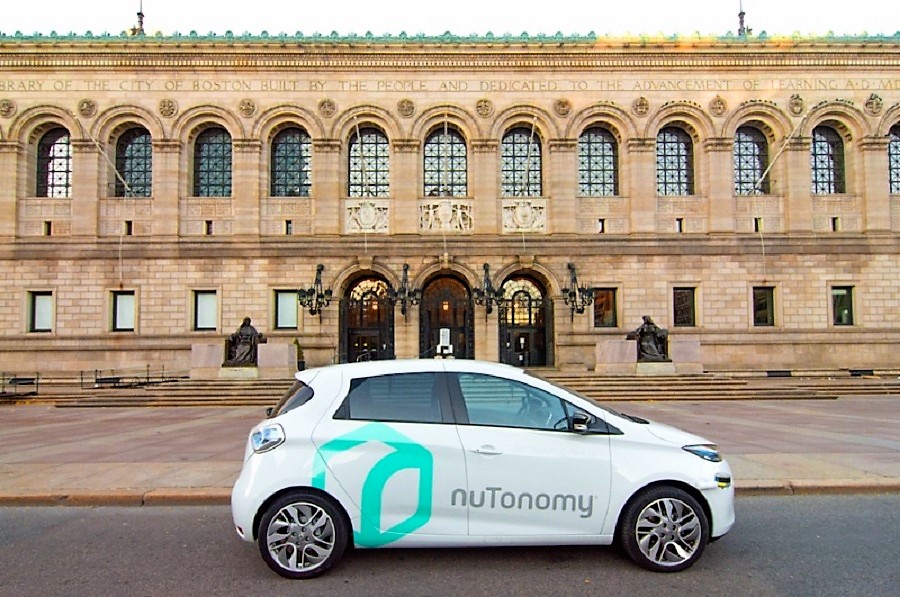 A nuTonomy vehicle in front of Boston Public Library

“Boston is ready to lead the charge on self-driving vehicles, and as Mayor of Boston, I am committed to ensuring autonomous vehicles will benefit Boston’s residents,” said Mayor Walsh. “This is an exciting step forward, and together with our public and private partners, we will continue to lead the way in creating a safe, reliable and equitable mobility plan for Boston’s residents.”

“As companies look to begin testing autonomous vehicles, MassDOT will work through the AV Working Group created by Massachusetts Executive Order No. 572 to manage a rigorous approval process and respective safety protocols,” said Transportation Secretary and CEO Stephanie Pollack. “Criteria and credentials needed for testing will be thoroughly evaluated, such as a private company’s demonstrated experience, licensing, inspection and registration status in order to ensure the safety of the public.”

Based in Cambridge, MA, nuTonomy will begin testing its self-driving Renault Zoe electric vehicle this year in the Raymond L. Flynn Marine Park in the Seaport neighborhood of Boston. nuTonomy outfits its vehicles with a state-of-the art software system, which has been integrated with high-performance sensing and computing components, to enable safe operation. The company’s sophisticated autonomous and robotics technology system grew out of research conducted in Massachusetts Institute of Technology labs run by nuTonomy co-founders Karl Iagnemma and Emilio Frazzoli. nuTonomy has been testing its software on roads in three continents, starting in December 2014, with its largest testing in Singapore.

“Boston and Massachusetts are leaders in rethinking the future of transportation, and we are grateful for their partnership and support of nuTonomy’s efforts to develop a fleet of self-driving cars to serve the public,” said Karl Iagnemma, CEO and co-founder of nuTonomy. “These tests in the City of Boston will enable our engineers to adapt our autonomous vehicle software to the weather and traffic challenges of this unique driving environment. Testing our self-driving cars so near to nuTonomy’s home is the next step towards our ultimate goal: deployment of a safe, efficient, fully autonomous mobility-on-demand transportation service.”

Bob Davis, General Partner at Highland Capital Partners in Cambridge, who led nuTonomy’s Series A financing, added, “Autonomous vehicles will transform human transportation and over the course of the next generation cars everywhere will drive themselves. Boston leading the way is yet another example of its position as a global hub of innovation.”

During the Boston road tests, nuTonomy’s software system will learn local signage and road markings while gaining a deeper understanding of pedestrian, cyclist and driver behavior and interaction across a complex urban driving environment.

nuTonomy will monitor and evaluate the performance of its software system throughout this testing phase. An engineer from nuTonomy will ride in the vehicle during testing to observe system performance and assume control if needed.

nuTonomy is the first partnership for on-street testing in Boston. It follows a previous off-street testing pilot with another company. The City of Boston is in conversation with other autonomous vehicle companies about additional on-street pilots.

In 2015, more than 35,000 people died as a result of motor vehicle crashes in the U.S., and National Highway Traffic Safety Administration (NHTSA) has estimated that driver error is the critical reason for approximately 94% of crashes. Autonomous vehicles promise to dramatically reduce fatalities and injuries, and to bring freedom to people living with physical challenges that prevent them from driving. Utilizing autonomous vehicles to lower the car crashes upholds Boston’s commitment to Vision Zero, the city’s pledge to eliminate fatal and serious traffic crashes in the city by 2030.

In addition to safety, autonomous vehicles can also bring environmental benefits: by using electric vehicles, mobility-on-demand autonomous car service can also reduce the number of trips taken in gasoline-powered vehicles and decrease the carbon footprint of transportation in urban settings.

The self-driving vehicle initiative is an early action project of Go Boston 2030, the City’s transportation planning effort. The effort is being led by the Boston Transportation Department and the Mayor’s Mobility Plan Advisory Committee. In addition to developing a long term strategic plan, Go Boston 2030 is identifying specific initiatives for immediate implementation. Additionally, the City of Boston is partnering with the World Economic Forum and the Boston Consulting Group on developing Autonomous Vehicle policies and models for testing.

nuTonomy is the leading developer of state-of-the-art software for self-driving vehicles founded by two world-renowned experts in robotics and intelligent vehicle technology, Drs. Karl Iagnemma and Emilio Frazzoli of MIT. nuTonomy is developing the first-of-its-kind complete solution for providing point-to-point mobility via large fleets of autonomous vehicles; this includes software for autonomous vehicle navigation in urban environments, smartphone-based ride hailing, fleet routing and management, and controlling a vehicle remotely through teleoperation. The company’s software has been tested in the U.S., Singapore and Europe. For more information about nuTonomy, visit: nutonomy.com.