(from ecns.cn) Chinese star Li Na said Saturday winning the Australian Open title was more satisfying than her Grand Slam breakthrough at the French Open because of the tough preparations that went into it.

When she won at Roland Garros in 2011, it was the first Grand Slam title by an Asian player and enormously raised the profile of not only Li, but tennis in the region.

But the victory was unexpected and she admitted she was not prepared to deal with it, later enduring a slump before returning to form under coach Carlos Rodriguez. 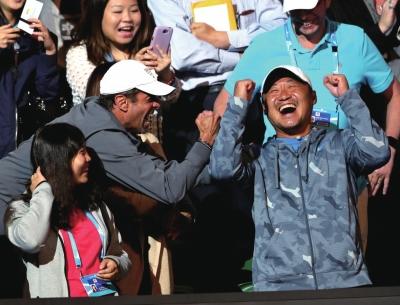 “I think now is different because I prepared to win a Grand Slam. Because this time I was thinking about if I win or if I lose, what kind of life I have. So for sure it’s different than last time.”

At the French Open she was running on adrenalin, but this time Li had a sleep in the locker room before the game and was cool and calm on court, using her experience to down Dominika Cibulkova 7-6 (7/3), 6-0.

“I prepared for this one for already two weeks. Every round, every day I was thinking about what I should do,” she said.

“And also maybe you guys don’t know how hard I was working mentally to make this one.”

With two Grand Slams now to her name, Li is keen to add more, preferably Wimbledon and the US Open. But at 31 she knows more glory will not come easy.

“Of course it’s very easy to say I want to win another one,” she said. “But I think if you are tennis athlete, you have to know how much work has to be done to win the Grand Slam.

“Of course if I want to win another one or two, I have to go back to court and work hard and it will be even more tough than before, otherwise no chance.”