Boston, Feb. 14, 2014, — The annual Ivy League Chinese Spring Festival Gala was held on Feb. 1, 2014 at John Hancock Hall in Boston. A sold-out audience of 1000 celebrated the Chinese New Year of the Horse with a diverse array of programs that lasted over four hours. 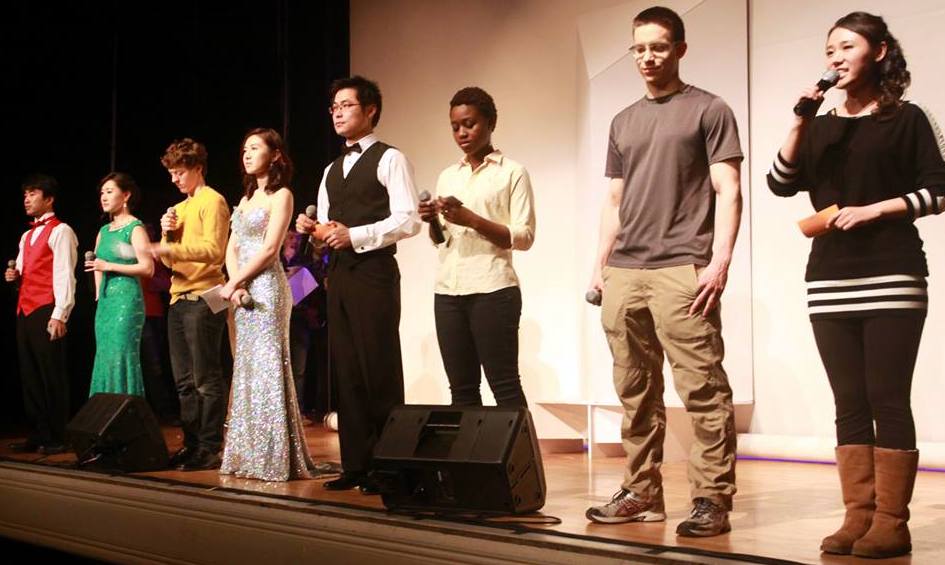 Hosts and hostesses for the 2014 gala (from HCSSA Facebook page).

Hosted by the Harvard Chinese Students and Scholars Association (HCSSA), the 2014 Ivy League Chinese Spring Festival Gala extends far beyond self-entertainment. An intimate gathering of Grammy-winning and nominee musicians, such as Eugene Friesen and Sandeep Das, demonstrated the spirit of peace and love that is associated with the Spring Festival itself.

The following is introduction of some performers by HCSSA.
Eugene Friesen (Grammy Winner, Director of Berklee World Strings)

Four-time Grammy Award-winner Eugene Friesen is active internationally as a cellist, composer, conductor and teacher. He has been featured in concerts all over the world with the Paul Winter Consort, with Trio Globo (Friesen, Howard Levy and Glen Velez), and in his popular CelloMan performances for children and families. A pioneer in the teaching of improvisation to classically trained musicians, Eugene has led workshops throughout North America and around the world. His book, Improvisation for Classically Trained Musicians (Berklee Press/Hal Leonard) was released in 2012. He is an artist-in-residence at the Cathedral of St. John the Divine in New York City, and is a Professor in the String Department at Berklee.

Hua Xia Chinese Dance Troupe was founded in July 1997 by a group of young women who shared the passion for Chinese classical and folk dance. Under the guidance of professional choreographers and dancers such as Chu Ling, Vivian Zhang, KeKe, Yuhan Ai, Grace Chan, Na Zhou, and Ma Jia, it has become one of the most recognized local Chinese dance group in the Boston area. Since its inception, Hua Xia has dedicated itself to the preservation and promotion of Chinese dance through active involvement in the cultural events of both the Chinese and American communities. Hua Xia has performed at Boston International Festival, Boston Moves, First Night Boston, Somerville Art Festival, Boston Art Festival, Celebration of Chinese New Year, Boston Anti-SARS Benefit Performance, Boston Chinese Performing Art Festival etc.

The Silk Road Ensemble draws together distinguished performers and composers from more than 20 countries in Asia, Europe and the Americas. Since the Ensemble formed under the artistic direction of Yo-Yo Ma (fifteen Grammy Awards winner) in 2000, these innovative artists have eagerly explored contemporary musical crossroads. The Silk Road Ensemble has performed to critical acclaim throughout Asia, Europe and North America and has recorded five albums. The most recent, Off the Map, was nominated for a Grammy Award in 2011.

Sandeep Das is considered one of the leading tabla players today. One of the favorite disciples of the legendary tabla maestro Pandit Kishan Maharaj ji of the Benaras Gharana, Das has carved out a niche for himself around the musical world. His concerts have taken him to major centers of music around the globe, including Carnegie Hall, Lincoln Center, Royce Hall, Royal Albert Hall, Hollywood Bowl and the Petronas Tower Hall in Malaysia.

“While Indian classical music classical music has a lot to do with improvisation, there are certain rules you must follow. The music we make with the Silk Road Project has no constraints. We are not paying attention to the rules and it gives me an opportunity to express myself in very different ways. Of course I love it, and that’s why I’m doing it,” said Sandeep Das.

Yazhi Guo is a world famous reed instrument performer. He has served as principal suona player at the Hong Kong Chinese Orchestra for many years. He graduated with distinction from the Central Conservatory of Music in Beijing, and has won many awards and national recognitions including the grand prize at New York’s International Pro Musicis in 1998. He’s performed with many orchestras around the world including Orhcestre de la Suisse Switzerland, South Korea Daejeon Philharmonic Orchestra, Belgium’s Flanders Symphony Orchestra, Malaysia Chinese Orchestra, Singapore Chinese Orchestra, and National Chinese Orchestra Taiwan. Recently Yazhi has begun studying Jazz at the Berkeley School of Music. He has also lectured at Harvard University.