Washington, DC, — The U.S. Department of Homeland Security (DHS) Office of Inspector General (OIG) is issuing this fraud alert to warn citizens of reports that DHS telephone numbers have been used recently as part of a telephone spoofing scam targeting individuals throughout the country. Spoofing is the deliberate falsifying of information transmitted to a caller ID display to disguise an identity. 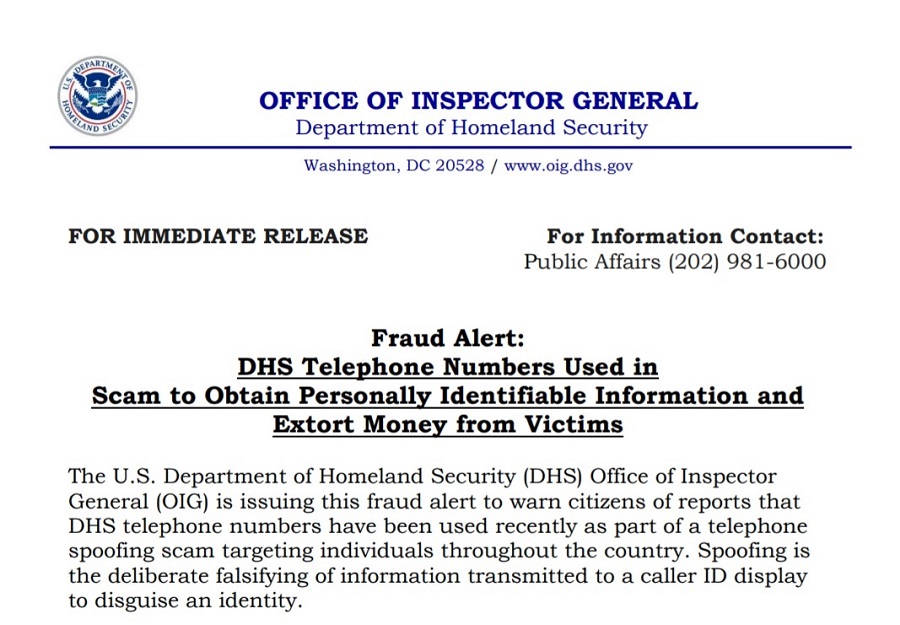 The perpetrators of the scam represent themselves as employees with “U.S. Immigration” or other government entities. They alter caller ID systems to make it appear that the call is coming from the DHS HQ Operator number (202-282-8000) or the DHS Civil Rights and Civil Liberties (CRCL) number (202-401-1474). The scammers obtain or verify personally identifiable information from their victims through various tactics, including by telling individuals that they are the victims of identity theft. The scammers also pose as law enforcement or immigration officials and threaten victims with arrest unless they make payments to the scammers using a variety of methods. The scammers have also emailed victims from email addresses ending in “uscis.org.” Many of the scammers reportedly have pronounced accents.

DHS OIG takes this matter very seriously. While we investigate the situation, we would like to remind the public that DHS never uses its HQ Operator or CRCL number to make outgoing calls of this nature. Individuals receiving phone calls from these numbers should not provide any personal information. It continues to be perfectly safe to place calls to the DHS HQ Operator and CRCL numbers and DHS officials may continue to be contacted by dialing the DHS HQ Operator number.

Anyone who believes they may have been a victim of this telephone spoofing scam is urged to call the DHS OIG Hotline (1-800-323-8603) or file a complaint online via the DHS OIG website www.oig.dhs.gov. You may also contact the Federal Trade Commission to file a complaint and/or report identity theft.