Beijing, October 16, 2014, — The fourth session of GYL Mentoring was held successfully in GYL Beijing office on Oct. 12. Mr. Wu Gang, the Associate Editor of China National Radio (CNR) New Media and GYL Youth Mentor was invited to give a lecture on “Global Leadership in the Information Age”. Mr. Wu is a senior reporter and an expert in new media. He recently returned from Boston after 12-month stay at Harvard University as a visiting scholar. 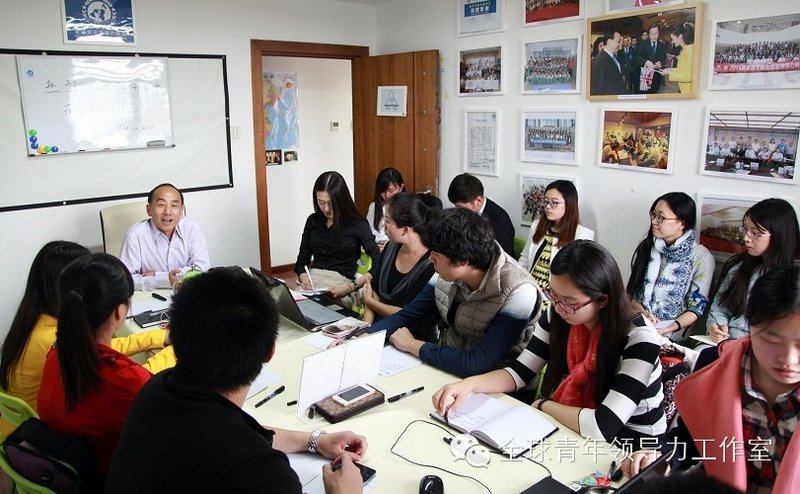 Mr. Wu started with the review of history. He pointed out that the Chinese civilization is the only one that continues without interruption. From 500 B.C. to 1500 A.D., China led the world in economy and technology, which gradually helped form Chinese confidence and leadership. Later, Europe and the U.S. first surpassed China; in the 16th century, Spain came standout because of gold and colonial trade; in the 17th century, Netherlands was the most developed with its rising capital market; France in 18th century with its enlightenment movement; U.K. in the 19th century with its first industrial revolution; and U.S. in 20th century with its technology, military strength and overall soft power, becoming the superpower of the world.

History is just like a mirror, reflecting repetition of the rise and fall of powers. Mr. Wu analyzed the characteristics of our modern times in this information age. Information is the resource, the wealth, and more importantly, the production. Currently, China has already integrated industrialization with informatization. As an emerging market, China should closely follow the trend of the third technological revolution and the law of Internet evolution to achieve breakthroughs.

In two-hour’s lecturing, mentor Wu analyzed the content and features of leadership in the information age from the perspective of culture, history, communication and management. He pointed out that the leadership generates cohesion. There are six types of leading power in six different times: Gutenberg’s age of printing gave rise to the modern civilization; in the age of telegraph, Lincoln won the civil war by using Morse Code; Roosevelt won people’s hearts by his ingenious use of radio “fireside chats”; Kennedy won the presidential election by giving TV media into full play; satellite technology promoted global integration; and in the information age, all things are connected, leading to global sharing.

“Technology is shaping our age. Global economy has been the key to future development. To know what is happening in the world and how we are thinking of the world is the only way of success.” He said.

In the question and answer session, mentor Wu answered two questions. The first one is how to find the most valuable piece in the ocean of diversified information. Wu said, everyone should have multi-screen awareness, that is, to keep an eye on all screens, such as mobile phone, TV and PC. Besides, one must focus on top media in every field. For traditional print media, the People’s Daily, New York Times and Washington Post are available; for financial media, the Financial Times and Bloomberg; for portals in China, Tencent, Sina and Baidu; for wechat public websites like caixinwang, 36Kr, huxiu_com, and guifabucom. Mentor Wu also encouraged us to use high-tech tools such as experimental smartphones. As for the second question of how to write reports, he said that for those who doesn’t study journalism, sense of self-ownership really counts in news gathering and writing. To write something humane and genuine, one should take the initiative and love what he or she is doing.

Mentor Wu also gave GYL some advice. “To be a global organization, GYL must have a global vision, focusing more on carrying out case studies and academic dialogues, and establishing Media Innovation Lab as well as innovation rules”.

“Share wisdom with everyone, and bring love to the world.” In the end, Mentor Wu wrote his wishes for GYL. “GYL is one of the most innovative and energetic organizations in the world and what you are doing is what we call life. Now we are in an era where rules are being rewritten, a period of unprecedented strategic opportunity for our youth. Do not ask what the country can do for you; ask what you can do for your country. Everyone should become his or her own master, taking responsibilities and fulfilling missions with passion. Go realize the great dream of GYL with your wisdom, morality and influence!”

“GYL Mentoring” is a newly created brand course of GYL. As a closed-door meeting, these sessions were exclusive to GYL members. GYL warmly welcome outstanding young people to join us. Together, we can benefit from mentors’ insight and become part of GYL’s success story, thus contributing to greater public interest.