Santa Barbara, California, Feb. 6, 2020, — With the backing of many U.S. private sector companies and foundations, Direct Relief today sent a major shipment of personal protective gear to Chinese hospitals at the epicenter of the coronavirus outbreak, including 250,000 N95 masks and other requested items. 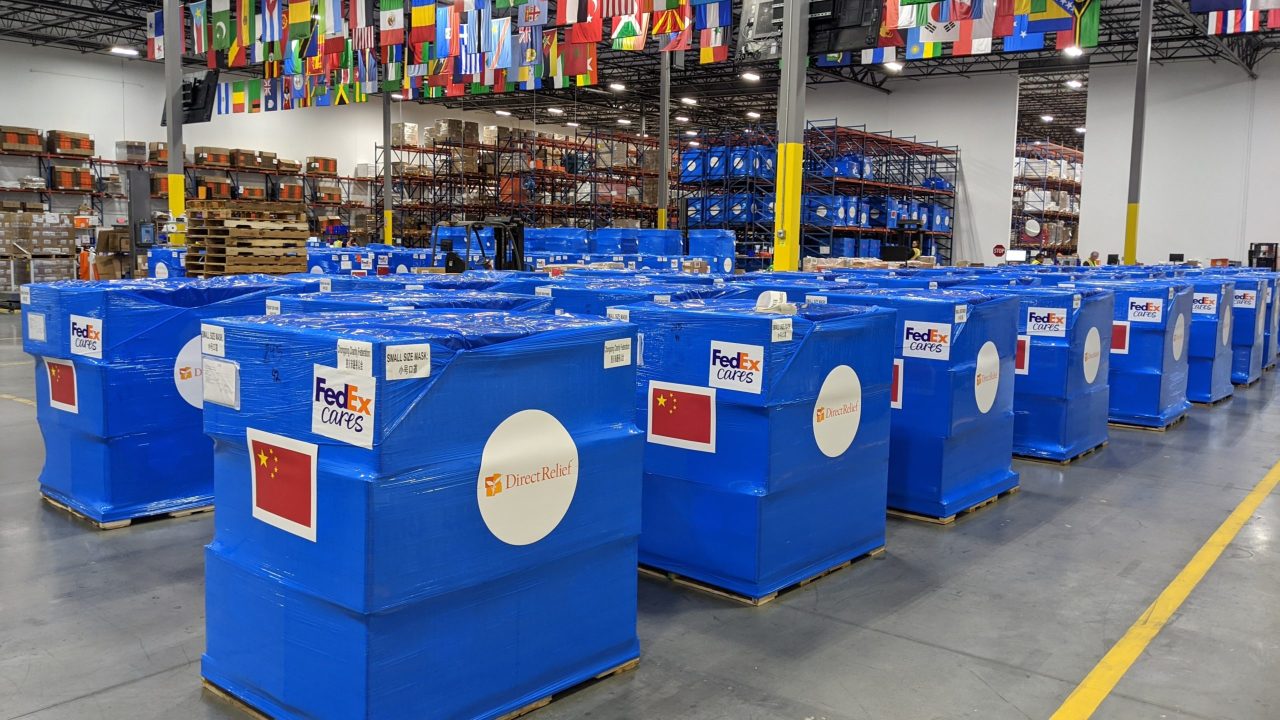 
The recipients in China include the largest hospitals in the three cities with the highest reported incidence of coronavirus—Wuhan, Xiaogan and Huanggang. The three cities are all located in Hubei Province, where more than 19,000 cases of novel coronavirus have been reported. Items in Thursday’s shipments will also be directed to local agencies in neighboring Chongqing.

A number of prominent U.S. private sector companies and foundations are channeling their China assistance through Direct Relief. The HP Foundation on Monday donated $1 million to the effort, with other large cash donations coming from Pfizer, Eli Lilly, and Grandstream Networks. 3M and Amazon have donated large quantities of personal protective gear.

All emergency shipments to China since Jan. 27 have been sent via FedEx, which has donated its transportation and logistics services to deliver the aid. Deliveries are being coordinated with support from Wuhan United, a group of Chinese Americans in the San Francisco Bay Area who have been mobilizing support to fight coronavirus in Wuhan.

“We are extremely grateful for Direct Relief and FedEx for their fast response and generous help with the fight against coronavirus,” said Tom Gong, president of Wuhan United. “Thanks to the joint efforts, we were able to quickly clear customs and transport supplies directly to hospitals in Wuhan through our extensive network of alumni, supporters and volunteers in China.”

Direct Relief is focusing its efforts on helping China’s medical workers protect themselves from the fast-spreading disease.

Meanwhile, hospital officials have told Direct Relief they don’t expect to receive any additional protective equipment from their usual suppliers until next month. Direct Relief has received additional requests for supplies from over 35 hospitals in 19 cities in China.

Direct Relief is allocating protective gear from its pre-existing strategic reserve while working to procure new protective gear from manufacturers and distributors, all of which are ramping up production to meet the increased demand. The shipments to China include only items that have been selected by receiving hospitals and organizations, are suitable for use in the current situation, and approved for import by the Chinese government.

The cumulative total of the shipments has comprised about two-thirds of the masks Direct Relief had in reserve at the start of the year. It will apportion out much of the rest to hospitals in China, pending distribution channels remaining open, while reserving inventories to address needs that could emerge in California, which has reported six confirmed cases, and elsewhere.

“We realized quickly it would be hard to replenish our supplies due to the global shortage of personal protective equipment, so we’re looking at how we allocate as much as possible to these hospitals for immediate needs, while retaining the ability to respond to emerging needs and simultaneously replenishing inventories,” said Andrew MacCalla, Direct Relief’s VP of emergency response. He noted that the initial focus has been on hospitals in Hubei province, where the epidemic began and has by far the most reported cases. “The scenario planning is very dynamic as information changes daily.”

“With the intensified activity in response to a declared global health emergency, it’s important to remember that the numbers of cases and activity being reported are about people,” said MacCalla. “We want the people in China who are facing a scary situation to know how many people are concerned about their welfare and are doing everything possible to help.”