June 19, 2020, Boston, — Governor Charlie Baker today issued a proclamation declaring June 19, 2020 as “Juneteenth Independence Day” in the Commonwealth of Massachusetts. Celebrated each year on June 19th, Juneteenth commemorates the end of slavery in the United States, and is an opportunity to reflect on the need to continue working toward racial justice. 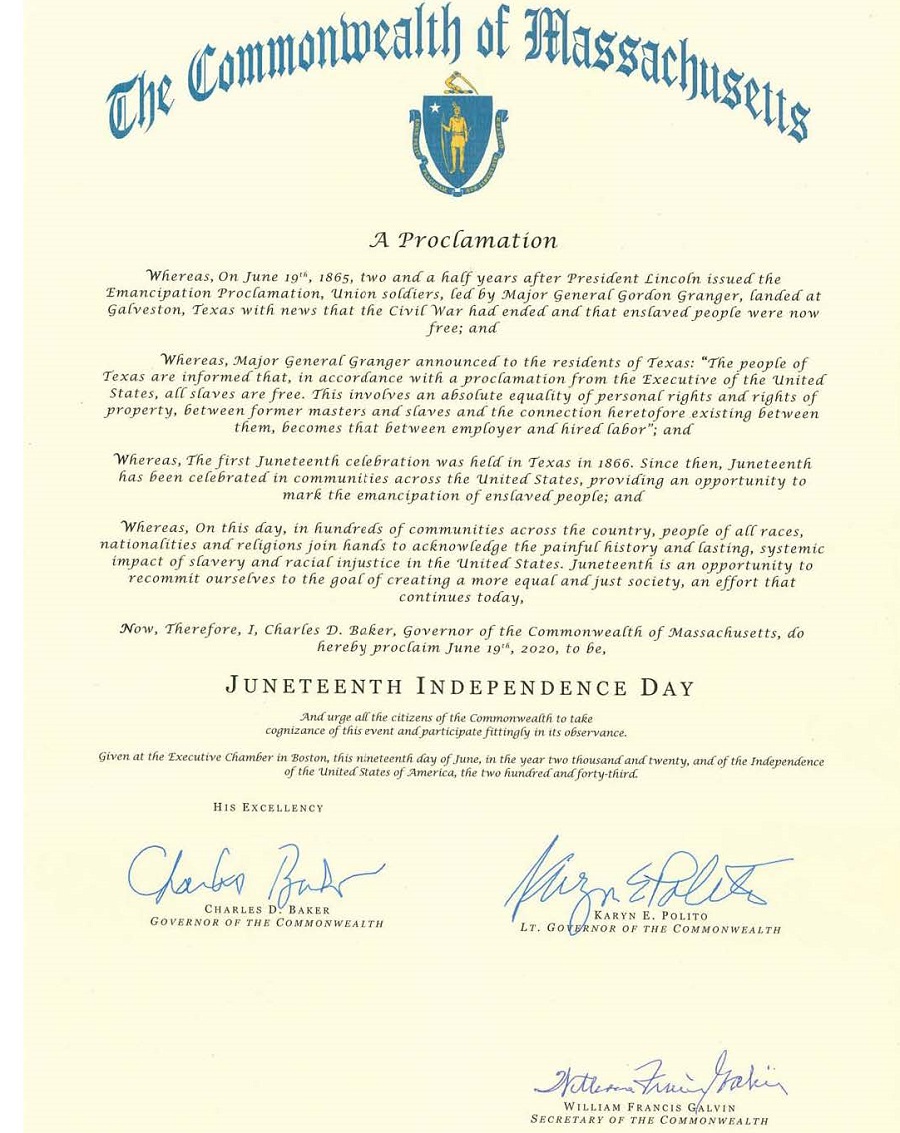 “Juneteenth is a chance for us all to reflect on this country’s painful history of slavery and the systemic impact that racial injustice continues to have today,” said Governor Charlie Baker. “It is also an opportunity to recommit ourselves to the goal of creating a more equal and just society. As our country continues the national conversation around racial injustice, it is especially important that we recognize Juneteenth. I look forward to working with our legislative colleagues to recognize this important day more widely going forward.”

“Juneteenth celebrations in Massachusetts and across the country mark an important moment in our country’s history and afford us a chance to reflect on the need to make progress toward racial equality,” said Lt. Governor Karyn Polito. “That reflection is more important now than ever, and we are glad to mark Juneteenth with today’s proclamation.”

Juneteenth is recognized each year on June 19. On that day in 1865, Major General Gordon Granger and his Union troops landed in Galveston, TX and announced that the Civil War had ended. Major General Gordon read a proclamation declaring that all enslaved people were free. The first Juneteenth was celebrated a year later in Texas and today is recognized across the country to mark this important milestone.

M.G.L. Chapter 6, Section 15BBBBB states, “The governor shall annually issue a proclamation setting apart the nineteenth of June as Juneteenth Independence Day, to be observed on the Sunday that is closest to June 19th of each year, in recognition of June 19, 1865 when Union General Gordon Granger announced freedom for all slaves in the Southwestern United States and in recognition of the end of slavery in the United States as well as the significant contributions individuals of African descent have made to the Commonwealth and to the United States and recommending that said day be observed in an appropriate manner by the people.”