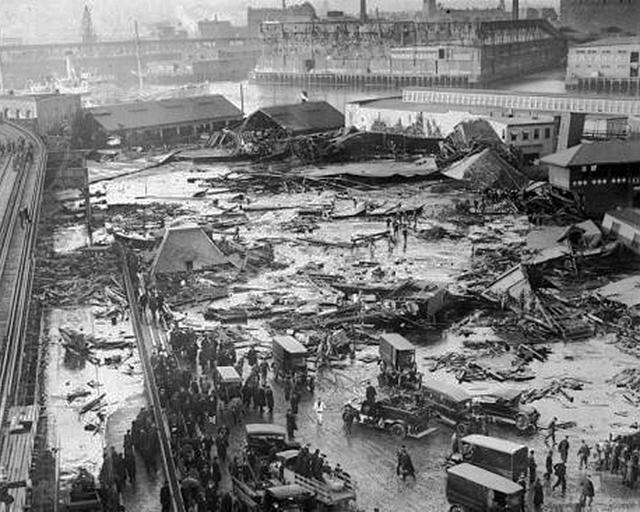 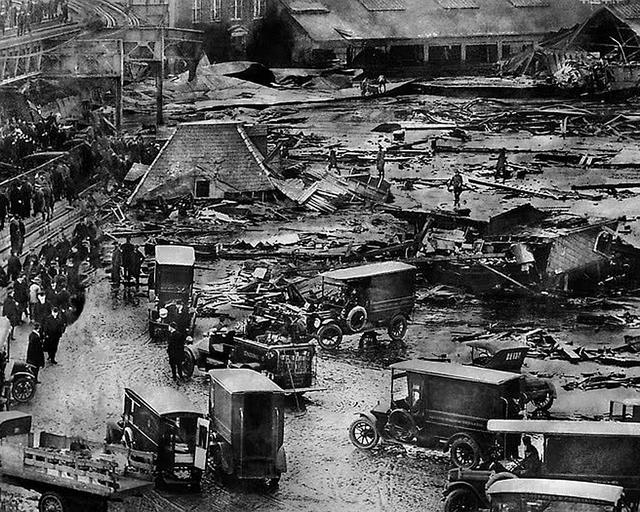 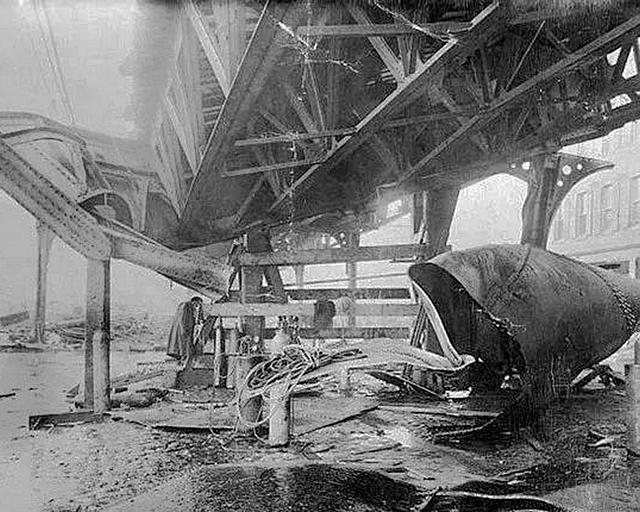 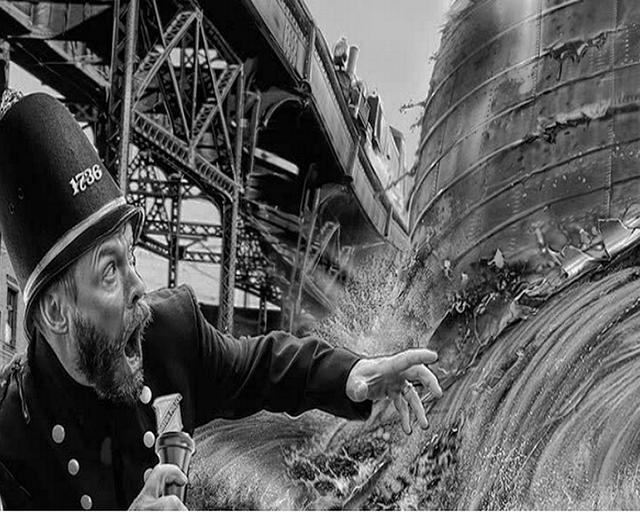 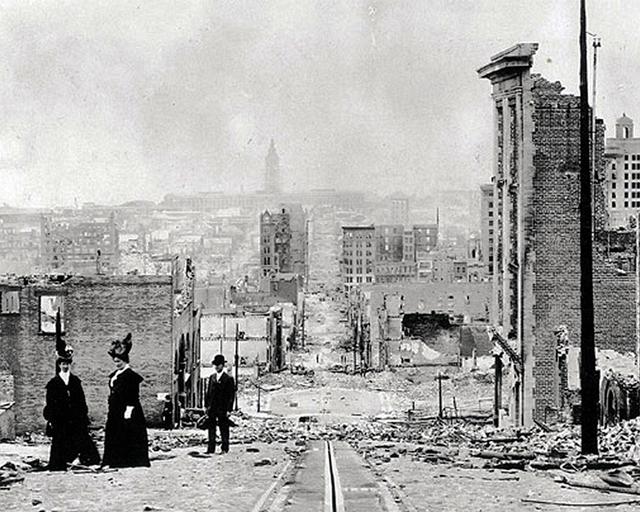 The Great Molasses Flood, also known as the Boston Molasses Disaster or the Great Boston Molasses Flood, and sometimes referred to locally as the Boston Molassacre, occurred on January 15, 1919, in the North End neighborhood of Boston, Massachusetts. A large storage tank burst, filled with 2,300,000 US gal (8,700 m3; 8,706,447 liters) (ca 12,000 tons; 10,886 metric tons; 24,000,000 lbs)[4] of molasses, and a wave of molasses rushed through the streets at an estimated 35 mph (56 km/h), killing 21 and injuring 150. The event entered local folklore and residents claimed for decades afterwards that the area still smelled of molasses on hot summer days.

The disaster occurred at the Purity Distilling Company facility at 529 Commercial Street near Keany Square. Molasses can be fermented to produce ethanol, the active ingredient in alcoholic beverages and a key component in munitions.[7]:11 Purity used the harborside Commercial Street tank to offload molasses from ships and store it for later transfer by pipeline to the Purity ethanol plant situated between Willow Street and Evereteze Way in Cambridge. The molasses tank stood 50 ft (15 m) tall and 90 ft (27 m) in diameter and contained as much as 2,300,000 US gal (8,700,000 L).

Modern downtown Boston with molasses flood area circled
On January 15, 1919, the temperature had risen above 40 °F (4 °C), climbing rapidly from the frigid temperatures of the preceding days,[7]:91, 95 and the previous day a ship had delivered a fresh load of molasses, which was warmed to reduce its viscosity for transfer.[8] Possibly due to the thermal expansion of the older cold molasses inside, the tank burst open and collapsed at approximately 12:30 pm. Witnesses reported that they felt the ground shake and heard a roar as it collapsed, a long rumble similar to the passing of an elevated train; others reported a tremendous crashing, a deep growling, “a thunderclap-like bang!”, and a machine gun-like sound as the rivets shot out of the tank.[7]:92–95

Molasses’ density is about 1.4 tonnes/m3, 40%[4] more dense than water, so it had a great deal of potential energy.[9] The collapse translated this energy into a wave of molasses 25 ft (8 m) high at its peak,[10] moving at 35 mph (56 km/h).[6][5] The wave was of sufficient force to drive steel panels of the burst tank against the girders of the adjacent Boston Elevated Railway’s Atlantic Avenue structure[11] and tip a streetcar momentarily off the El’s tracks. Stephen Puleo describes how nearby buildings were swept off their foundations and crushed. Several blocks were flooded to a depth of 2 to 3 ft (60 to 90 cm). Puleo quotes a Boston Post report:

Molasses, waist deep, covered the street and swirled and bubbled about the wreckage …. Here and there struggled a form—whether it was animal or human being was impossible to tell. Only an upheaval, a thrashing about in the sticky mass, showed where any life was …. Horses died like so many flies on sticky fly-paper. The more they struggled, the deeper in the mess they were ensnared. Human beings—men and women—suffered likewise.[7]:98

The Boston Globe reported that people “were picked up by a rush of air and hurled many feet”. Others had debris hurled at them from the rush of sweet-smelling air. A truck was picked up and hurled into Boston Harbor. After the initial wave, the molasses became viscous, exacerbated by the cold temperatures, trapping those caught in the wave and making it even more difficult to rescue them.[9] About 150 people were injured, and 21 people and several horses were killed. Some were crushed and drowned by the molasses or by the debris that it carried within.[12] The wounded included people, horses, and dogs; coughing fits became one of the most common ailments after the initial blast. Edwards Park wrote of one child’s experience in a 1983 article for Smithsonian:

Anthony di Stasio, walking homeward with his sisters from the Michelangelo School, was picked up by the wave and carried, tumbling on its crest, almost as though he were surfing. Then he grounded and the molasses rolled him like a pebble as the wave diminished. He heard his mother call his name and couldn’t answer, his throat was so clogged with the smothering goo. He passed out, then opened his eyes to find three of his four sisters staring at him.