By Brian Han, The Korea Times

Asian applicants who apply to some of the most prestigious U.S. universities such as Harvard, Yale and Stanford may already be at a statistical disadvantage based purely on ethnicity.

This isn’t necessarily breaking news, but Edward Blum, head of the legal agency that is spearheading the effort, is attempting to uncover the phenomenon in a legally viable manner. The end goal is to ultimately shift college admissions processes away from race-based affirmative action and towards race-neutral alternatives. 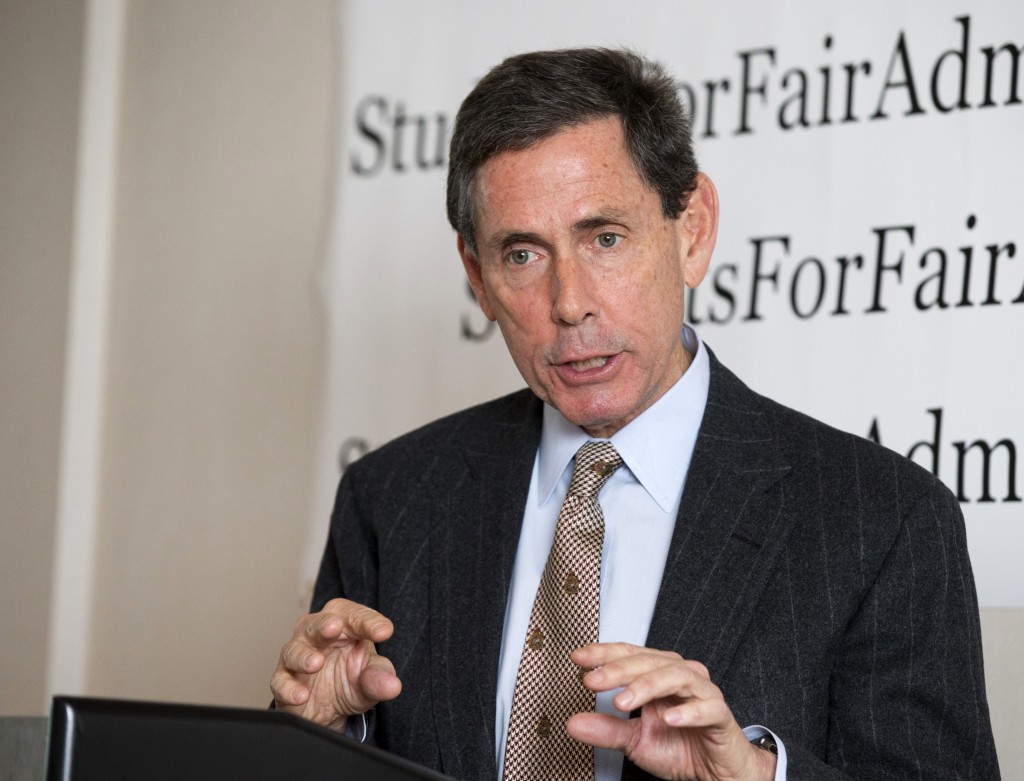 Edward Blum, the director of the Project on Fair Representation, during a news conference in Washington, Monday, Nov. 17, 2014, announced the filing of two lawsuits challenging the alleged racial preference admissions policies of Harvard and the University of North Carolina-Chapel Hill . (AP Photo/Manuel Balce Ceneta)

“Koreans, Chinese, Indians and other nationalities from the Asian continent are lumped together in a category that is simply called ‘Asian,’” Blum said. “The Ivy Leagues have systematically limited the number of that group that they will admit. The number of Asians that were admitted 20 years ago is actually higher than the number admitted over the last year or two, even though the number of Asian applicants have doubled.”

If those figures are accurate, those numbers highlight a disturbing trend that have reached a tipping point for legal action.

With lawsuits already filed against both Harvard University and the University of North Carolina-Chapel Hill, momentum has already grown in just the past few days.

“The response has been quite vigorous,” Blum said. “We are approaching a membership of nearly 200 people. Over the next year, I could easily see our membership exceeding 300 to 400 people.”

The most surprising part about this wave of support is that the students who decide to involve themselves with this lawsuit are doing so for mostly selfless motives.

If the lawsuit is won, it won’t change or reverse any admissions decisions, but it can restructure a potentially flawed system.

“To those who were denied admission, that is most we can offer at the moment,” Blum said. “We might be able to file additional lawsuits depending on what information is uncovered. Those students can be gratified in knowing that the schools that wrongfully denied them are being targeted and that future generations including younger sisters, brothers or cousins – won’t have their chances of admission affected by these pernicious quotas.”

The University of California, Berkeley, another top-tier school, represents a stark contrast to places like Harvard — a comparison that emphasizes the possibility of racial discrimination.

“If you look at places like [UC] Berkeley, as the Asian applicants have grown, so have the acceptances for the same demographic,” explains Blum. “Harvard, Yale and many other Ivy Leagues have flatlined the number of Asians they will admit. It strongly suggests that they have a quota and a racial balancing policy. That is expressly unconstitutional.”

“The university’s admissions processes remain fully compliant with all legal requirements and are essential to the pedagogical objectives that underlie Harvard’s educational mission,” Iuliano said.

Although Asian students who are currently in the process of applying to colleges may still have to be subjected to disadvantageous racial quotas during the application process, they can still contribute their efforts towards the case in a different way.

“If current applicants do decide to participate in our efforts, it’s very important that they tell us who they are, tell us their plans as to which school they will apply to, and stay in touch with us,” he said. “Tell us which school accepted you and rejected you. It’s a very important element in this lawsuit.”