WASHINGTON, May 10, 2013 /PRNewswire/ — Alec Sun of Lexington, Mass., won the 2013 Raytheon MATHCOUNTS® National Competition today at the Washington Marriott Wardman Park in Washington, D.C. The winning Mathlete® answered the following math problem in less than 45 seconds to be crowned the National Champion:
Question:

What is the greatest integer that must be a factor of the sum of any four consecutive positive odd integers?
Answer: 8 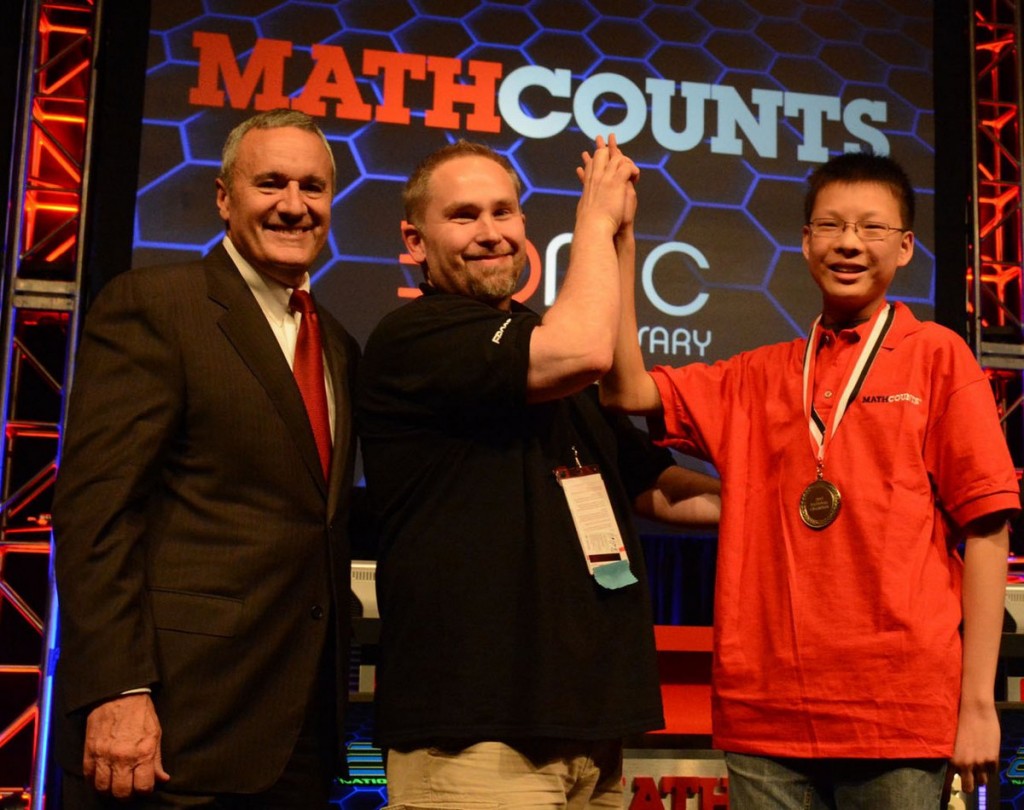 “I want to commend the 2013 Raytheon MATHCOUNTS National Competition participants on their tremendous achievements,” said William H. Swanson , Raytheon Chairman and CEO, and 2013 MATHCOUNTS honorary chairman. “Their command of math at such a young age is truly impressive. After watching them enthusiastically compete at such a high level, I see great potential for these Mathletes to be among our next generation of American innovators in fields like science, technology, engineering and math.”

“I congratulate all 224 of these exceptional students who have demonstrated talent, enthusiasm and dedication throughout the entire MATHCOUNTS competition,” said Lou DiGioia , executive director of MATHCOUNTS. “Each and every Mathlete here has done an incredible job, and they should all be extremely proud of their accomplishments.”

The final 224 competitors represented all 50 states, the District of Columbia, U.S. territories and schools from the Departments of Defense and State. They prevailed in heart-pounding competitions involving some 100,000 students from more than 5,000 schools at the local and state level to earn the right to compete in Washington, D.C.

About MATHCOUNTS
MATHCOUNTS® is a non-profit national math enrichment, coaching and competition program that promotes middle school mathematics achievement in every U.S. state and territory, and is one of the most successful education partnerships involving volunteers, educators, industry sponsors and students in America. MATHCOUNTS offers teachers, kids and parents free materials to encourage math enrichment and prepare students for a high-tech future that will require mathematics-related skills to achieve success. Materials and information are available at www.mathcounts.org.

About MathMovesU
Raytheon’s MathMovesU® program is an initiative committed to increasing middle and elementary school students’ interest in math and science education by engaging them in hands-on, interactive activities. The innovative programs of MathMovesU include the traveling interactive experience MathAlive!™; Raytheon’s Sum of all Thrills™ experience at INNOVENTIONS atEpcot®, which showcases math in action as students design and experience their own thrill ride using math fundamentals; the “In the Numbers” game, a partnership with the New England Patriots on display at The Hall at Patriot Place presented by Raytheon; the company’s ongoing sponsorship of the MATHCOUNTS® National Competition; and the MathMovesU scholarship and grant program. Follow MathMovesU and other Raytheon community outreach programs on Facebook and on Twitter@MathMovesU.

About Raytheon
Raytheon Company (NYSE: RTN), with 2012 sales of $24 billion and 68,000 employees worldwide, is a technology and innovation leader specializing in defense, security and civil markets throughout the world. With a history of innovation spanning 91 years, Raytheon provides state-of-the-art electronics, mission systems integration and other capabilities in the areas of sensing; effects; and command, control, communications and intelligence systems; as well as a broad range of mission support services. Raytheon is headquartered in Waltham, Mass. For more about Raytheon, visit us at www.raytheon.com and follow us on Twitter @raytheon.